Hello guys! How you doin’? We hope you’re having a blast! Now you may have heard that we were on holiday recently, but worry not, we were not lazy. As part of our little adventure in Spain we did a special edition of the Cespedes – Gonzalez household renowned timba: games party bby!!

We cracked open the board games and have a full on day (from lunch time until midnight) on geekery. There was much banter and fun had, and a few crazy moments and sore loses. So here is a quick report of what we played and a few thoughts on a couple of games.

STRAW – this is a great game and family favourite for a warm up. It has little to no rules, and it holds up to 5 players. You play one round per player so it goes pretty quick. And all that there is involved here is a little maths: you have to add or take weight from the camel’s back. I failed big time. For 4 rounds I scored nothing 😐 My dad got a clear victory with no possible competition. This was not a very usual game of Straw in that regards. But the game has a high luck component which needs to be taken into consideration.

KERALA – relatively new game for the family; certainly a first for me. It is a game of area control, under the premise that you are building a trading platform for your elephant. You score more points for each colour you incorporate into your platform, you score more points. It’s a fairly simple dynamic of time placement, and has a luck component similar to Azul. Surprisingly, I won! Well, it was a tie with my dad, BUT it still counts as victory!

MAUNA KEA – also known as escape the lava game -…well, I made a song that I used as a chant to hope the lava wouldn’t kill me… XD the objective of the game is to escape the island with hopefully at least one meeple (the rest is optional). The luck component in this game is incredibly high, and lava can come out at any point whilst you’re taking out your tiles to escape.

No one actually won in realistic terms, though a technical victory was granted to Alex here and our friend Francis because they had a meeple each which hadn’t died… Poor man’s victory, imo…

BLACK SHEEP – this is essentially poker, but where farm animals replace numbers. Each animal has a value and you are trying to win animals per field, which means you’re actually playing 3 poker games with the one hand that you can draw new cards for every turn. However that means sometimes you may have to give up in certain fields to succeed in others. There are common and hidden objectives that help towards the end game scoring, but the easiest way to win is by accumulation of animals – all except black sheep. I had a good run in this one for a little while. Let’s just say that, if this would have been a casino, it wouldn’t have resulted in lots of bling!

MARRAKESH – I LOVE THIS GAME! An all time favourite, this is a great laugh because of it’s simplicity and it’s tactile value. You are a rug seller in Marrakesh competing against the other players for profit. You have your own lil rugs that you place to get money, and that’s it. Looks like this: 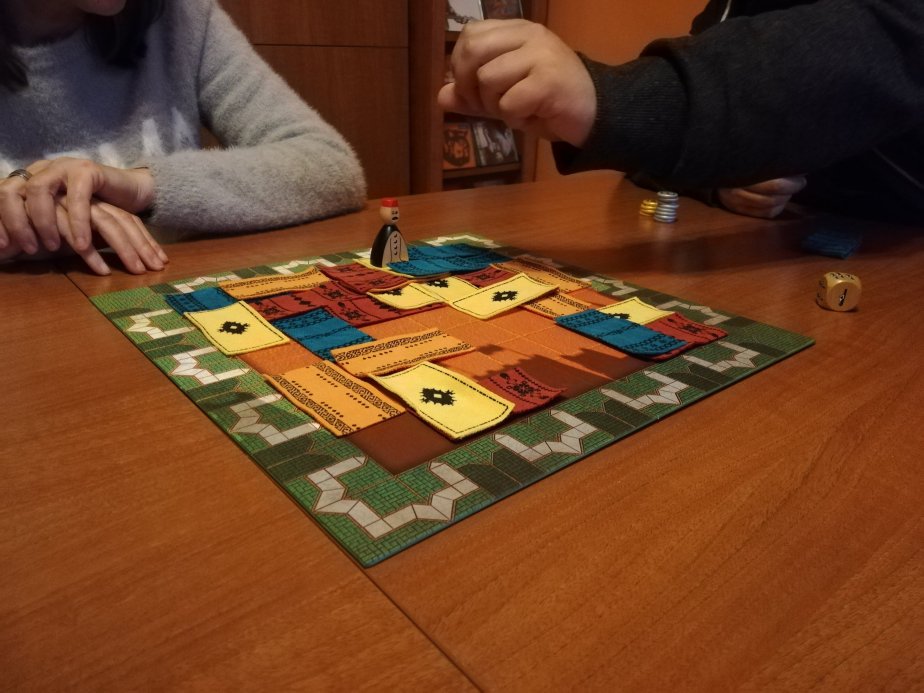 I seemed to be winning, until my mum got herself ahead very quickly, and it was almost impossible to catch up. Alas, always fun wrestling to cover other people’s rugs.

FAMILY BUSINESS – the most brutal game: mobsters killing mobsters. It’s a very fast pace game where you need to balance how aggro you are towards the other players, defending yourself and saving your own. Usually ends in Big Deaths – exactly how it went. I am a vengeful person and got them dying quick! And again, victory snatched from my dead, cold fingers 😭

PIKO PIKO – another fast pacing game, that we have already discussed in a previous post:

As with most azarous games: I Suck lol

CAMEL UP – one of my favourite games ever. I won big time. A combination of using my consortium at the right time, placing my money making tile in the right spot and not getting too enthusiastic about what camel may win, but ensuring which one would lose 😁

So, this is how we party back in Spain during game night. Add tasty local burgers and you got the perfect day.

How do you guys game with your friends? And what are your games party favourites? We look forward hearing your feedback!

See you on the next one 😁