“For all the long running jokes and internet hoaxes, Dragonball AF may have decided the entire future of the franchise!”

A lot has changed as we approach the 20’s once again. We have Dragonball, Transformers, Teenage Mutant Ninja Turtles, Batman…
Okay so very little seems to have changed. Popular culture has cherry picked its favourite media and chiselled it in stone to live alongside us to old age. But that’s not to say these beloved books, movies and shows haven’t had to adapt to serious changes. Many have lost their original creators or undergone overhauls to stay relevant in our fast-paced entertainment world. Many others are on the brink of such considerable change, even if it is approaching so quietly we don’t notice it.

One such show is the long-standing anime saga ‘Dragonball’. From humble comic book beginnings this action series have branched into multiple anime television ventures including original DB, Dragonball Z and Dragonball GT- with its newest venture Dragonball Super being so jaw-droppingly popular it’s topped the anime listings across Japan. Even after a decade without new content the anticipation of Super was so great it’s sent Dragonball into a new golden age of popularity- enough that Son Goku has been announced the cultural mascot for Japans 2020 Olympic games!

But with the continued popularity explosion of Dragonball Super and all its related spin-offs we have to ask ourselves- what happens when Toriyama calls it quits?

It wouldn’t be the first time after all. After the Dragonball Z series concluded back in the early nineties Akira Toriyama declared he would be stepping away from his prize creation and look towards newer, fresher ideas. It was well-known among the community that the final sagas had brought him to exhaustion and he just didn’t have the same ambition for the story as he once did. And who could blame the man? He conceived it as a simple adventure story for Japanese school kids in the 80’s. Even further back if you want to include the prototype comics like Dragon-Boy!
But the day will come when the last wish is made and Toriyama becomes unable, or unwilling, to return to the franchise. The most obvious cause being his own eventual passing (the man is in his sixties currently, we often forget) but could just as likely be down to the passing of an irreplaceable cast member. Series veteran and lead actress Masako Nozawa, who has lent her extraordinary talents to the Japanese dub for over 30 years, is now a proud 80 years of age!

So what happens should the time come that we have Dragonball without Toriyama?
One of the most remarkable changes would be one that isn’t tied to the production of the show or even its design- but about how the fanbase perceives the show. Anyone not muscles deep in the franchise may not be aware that there is a frequently used barometer for all new material that comes out, often summarised as “Was Toriyama involved?” This question has put the nail in the coffin for many Dragonball properties including the oft mixed-reception of Dragonball GT, which featured a superior budget and even superior animation quality but who’s writing gained considerable ire for not having any involvement from the series creator beyond a couple of concept sketches in the early stage. This same hurdle has been applied to many episodes of the TV anime and entire movies under the licence! Since Toriyama himself didn’t write them (with the exception of the most recent two films, ‘Battle of Gods’ and ‘Resurrection F’) they are condemned as non-canon by the fan community.
This means that fresh and exciting characters like Pikkon and the Supreme Kai entourage from the series and movie legends like Broly and Freiza’s forgotten brother Cooler exist in an existential limbo, accepted by some and ignored by others. So much so it was called a ‘notable exception’ when Toriyama included movie character Bardock into one of his own projects and canonised him into Dragonball lore. With the Master no longer around to give his blessing to new ideas what would become the new yardstick by which Dragonball is measured?

The answer may come to us in the form of a Japanese artist called Toyble.

Over the years numerous obscure sequels have already popped up across the globe largely following the finale of the Z anime- such as Dragonball Multiverse, Infinite, New Age and the recently unearthed Dragonball ZeroVerse (also called Tibetan edition). Most of these independent projects depict original stories involving the established cast and follow very divergent paths from the officially licenced Dragonball GT manga. The one name that most fans will recognise is one which, for a substantial period of time at least, never ACTUALLY existed.
That title is of course; Dragonball AF. To understand where Dragonball is headed in its near future, and what may well define its distant future, this is an essential piece of the puzzle… because for all the long running jokes and internet hoaxes, Dragonball AF may have decided the entire future of the franchise!

This insane chain of events began in the mid-90 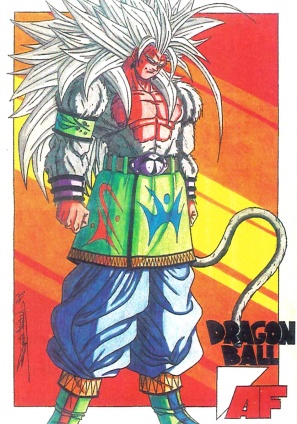 ’s after a single image began floating around the internet. In a time when web communities were much smaller and more connected this meant information and rumours travelled fast and many proclaimed this artwork to be a promotional piece for a new series ready to air in Japan. How little we knew though, for the image was actually a submission to a Spanish language games magazine by an artist known as Franco, whose initials were put on the page as DAF … Dragonball AF? Yes, even the title was misunderstood by the internet who assumed AF was a new series drawn by Toriyama himself and destined for release. The original image wasn’t even a drawing of Goku like everyone thought! Years after the artist stated the piece was an original character from his own fan story taking place years after Goku’s death.
Why is this important? Because the fanbase grabbed hold of the rumours and went wild. The artworks sparked imaginations with more elements and characters added each day just piling fuel on the fire. Soon there were hundreds of ‘new’ Dragonball AF elements being passed around with many people convinced of their legitimacy and others unsure what to think. The fanbase somehow managed to fabricate an entire anime series and convince itself it was real at the same time- something we’ve never seen before (or since).
Derek Padula, The Dao of Dragonball, categorised a few of the bizarre features that the AF snowball accumulated in his article Dragonball AF Explained (2012) ;

“A few crudely drawn images appeared of Goku photoshopped to have different colour hair, Pan with golden hair, Super Saiyan Raditz and other seemingly random combinations of fused characters, like Vegetunks, the fusion of Vegeta and Trunks. Meanwhile, Super Saiyan 5 was surpassed by Super Saiyan 6. Goku was now “Evil Goku” because he had been corrupted by the power of the Dragon balls and it was up to Vegeta to stop him… and a new set of Potara earrings could now fuse 3 people together, instead of only 2.”

Ultimately the Dao put the blame for this katamari damacy of information onto people not being able to draw the line between fan made fiction and official releases in a foreign country.  This came to a head when an infamous prank by Daizenshuu EX magazine hit shelves abroad in 2004, with mocked up leaks of an ‘official’ Dragonball AF series, formatted like any other promotional ad and looking rather convincing for its time, even if the artwork is questionable on revision. The Japanese-language magazine marked the 8th of September 2004 as the release date and while Japanese speaking audiences could quickly identify the parody in the writing western audiences had no idea and the internet was ablaze- with a video promotion even being released to tie in with the joke! Once the pin had been pulled there was no going back no matter how many redactions were made.

Then in 2006 a young artist known as ‘Toyble’ released a fan comic affectionately named Dragonball AF which would soon be considered the definitive version. Toyble’s comic dismissed much of the fan theorising and created its own contained universe that he called an ‘interpretive story’ and not to be taken too seriously. His lore included many strange new ideas such as new Super Saiyan forms and the idea of evil clones… wait, that sounds familiar doesn’t it? Well let’s find out why.
Toyble was also known for fan mangas like Dragonball Zero: Story of Raditz that followed Goku’s older brother shortly before the destruction of their home planet. Then in 2015 Toyble- now working under his full name Toyotarou, was asked to illustrate the official Dragonball Resurrection F manga spinoff after the success of the movie!
This was the break the upcoming artist needed to make his mark on the franchise, as the spinoff was so well received Toyotarou got to live out his dream as the lead artist of the one and only Dragonball Super official manga! Which he is still illustrating to this day in place of Toriyama, who is taking a more relaxed position doing storyboards, plot annotations and character designs for the series and letting the young blood handle the messy work.

As of second-quarter 2017 Toyotarou (aka Toyble) is now a central part of Dragonballs creative process and worked alongside Toriyama in designing the 12 Universes’ godly pantheons, brainstorming ideas and designs with his idol. Toyotarou has now been named as Toriyama’s “official successor” and should the day come where the big-T will no longer be filling our lives with shouting muscular heroes it will be down to the artist of Dragonball AF to carry the torch.

Today the series is more popular than it’s been since the early 90’s when it topped cartoon shows worldwide with its fresh approach to action. Now Super is topping One Piece in the charts and making record sales in videogames like Xenoverse and the surprisingly great Dragonball Fusions for 3DS.  As blessed as the series is for this giant revival it’s quite a remarkable moment in anime history as a whole that the greatest fan hallucination of all time, the imaginary Dragonball AF, should be the catalyst that led Akira Toriyama to appoint one of his most loving fans as nothing less than the next generation of Dragonball.

Just goes to show that when you wish upon a dragon anything is possible. 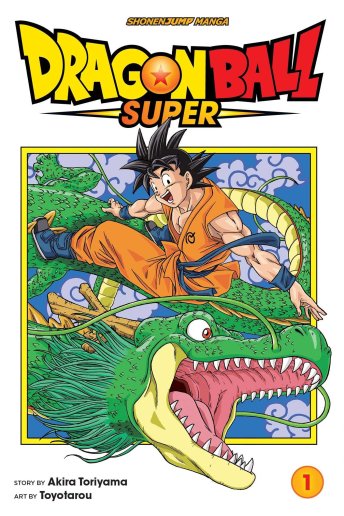