For our next post in our RPG month I bring you a review of an interesting little Sci-Fi RPG called Skum of the Stars recently published by Owlman Press. The rulebook starts off with a page of background on the universe you’ll be playing in, and as with most things about this game things are kept quite simple yet effective. A huge and ancient inter-stellar empire, awesomely named The Blood Empire, has gone the way of Rome and collapsed, allowing barbarians and criminals to run rampant across the galaxy. This has led to new opportunities of adventure, not for your usual RPG heroes, but instead for pirates, warlords, thieves and other outlaws. The writing in this section really conjures up images of something like Star Wars, except each space-port is as much of a wretched hive of scum and villainy as Mos Eisley. Other than this there is mention of new kingdoms and empires popping up and vanishing regularly, an increasing scarcity of warp-gate technology causing chaos, and the existence of many different humanoid species. As I said, things are kept quite simple in terms of story here, which can be a nice change for a DM hoping to run a wacky Sci-Fi game without having to read a ton of fluff to just get started coming up with their own campaign. There’s just enough here to kick you off and give you the tone of the game.

So now we can move straight into character creation. This is where the game really shown how flexible it can be, because as mentioned there are many forms of humanoid aliens out there in the remains of the Blood Empire, and with this character creation system you can come up with them yourself! You can make any combination of Species Features listed and described in the book to come up with your own basic alien species. This could be quite interesting for the DM as it lets the players give them some ideas themselves rather than just going with what is on offer. If not, the DM could always create a selection of species for the characters to choose from if they have any particular plans for the game. Either way, the opportunities with this simple yet effective character creation method could be great.

Once the species is created you then further define your character in the usual way with their basic stats, called traits in this game. The basic ones are called Arcana, Intuition, Shatter, Vitality, Barrier, Defence, Move and Wounds. All are pretty self-explanatory apart from Shatter which is basically a combination of strength, reflexes, coordination and balance, meaning it is the one to use for combat. I like the simplicity of it, as it resolves some of the potential problems and confusion over what stat to use for different actions in combat. Once these stats are sorted out you then move onto Talents, which are varying additions to your character that flesh out their background and make them into an individual. For example there are ‘Ally Talents’ to give them a sidekick or squad to take control of. ‘Arcana Talents’ which give you psychic or magical attacks and abilities. ‘Background Talents’ to make your character especially skilled in an action, or give them pre-existing enemies or wounds. This list of talents is fairly extensive and gives the players plenty to choose from, but each talent is also fairly easy to modify, and the DM could also easily come up with entirely new ones to give to the players thanks to the simplicity of the rules. 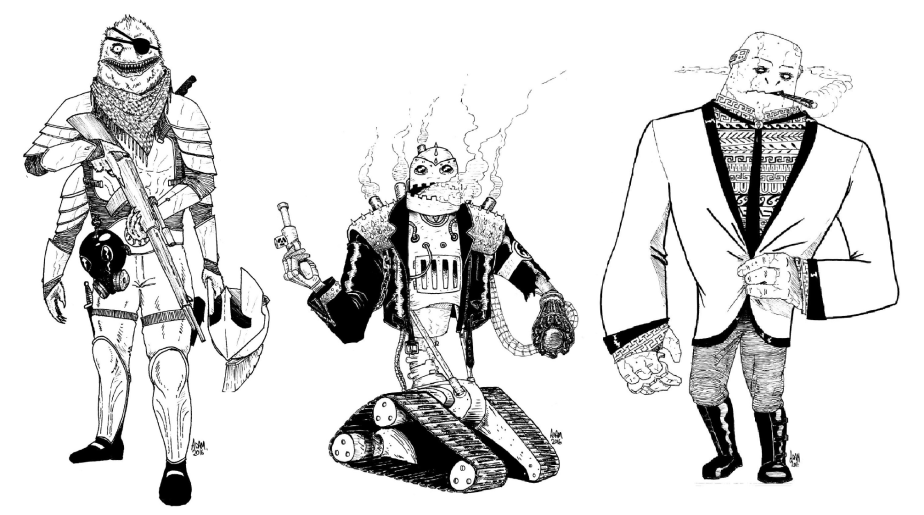 Onto the rules. For rolls the game uses a number of D6 equal to the character’s trait number, and the aim is to get a 5 or 6 for a success, while 1 to 4 are failures. To succeed only a single 5 or 6 is required, so when your character’s skill increases you will be rolling more dice and more likely to get at least one success roll. Compared to other dicepool systems where you need to add the rolls together this keeps things a little faster paced and easier. The description for rolling a 1 on a die I quite like here. For every 1 rolled that represents a minor mistake made that can generally go unnoticed, but when you roll more 1s than successes that is considered a Catastrophic Outcome, and based on the circumstances the DM can choose any number of negative events to occur, be they in the narrative or something like giving enemies an advantage, or some form of hazard to occur. I find this to be a fairly interesting way to do critical failures, with interpreting it as a combination of mistakes and errors that result in an especially bad failure rather than just not succeeding. The DM or player could even play around with the small mistakes during the game to make interesting things happen even while the roll still succeeds. Another part of the dice system I like here is how multitasking is achieved. If a character is trying to do something such as run and shoot, or anything more complicated, then they must roll 2 successes, and if only 1 die is a success in that roll then the DM gets to decide which action failed, which could lead to some interesting outcomes. Also, if the roll uses two different traits, then the lowest total of dice out of the two is used, which is fairly straightforward and makes sense to me.

I won’t go through all the game rules in detail here, you can do that yourself if you go and get the game! I will just go through and mention some things that stand out to me. The combat system appears to be quite robust and allows for various actions to be attempted. The DM can group together the moves of NPCs or ‘extras’ in combat to keep things simple and save time, which I quite like. Something that I like in the game is that there is a ‘permanent injury table’ which reminds me of some other games I’ve taken a look at, and really appeals to me. It makes combat have high stakes without the characters being really easy to kill, although there is still the potential to die on an especially bad roll of the injury table. The lists for equipment and weapons have plenty for you to play with, and some cool gadgets that you would expect in this sort of setting. Thanks to the items mostly just consisting of a trait bonus and a more narrative use, it would be easy to come up with new stuff to add to the game. The rules for starships in the game are also fairly narrative and allow for the DM or players to come up with any cool addition they can think of.

In terms of other content, the book features a short introductory adventure with some details on locations and characters to use, and a straightforward goal to get the Player Characters acquainted with one another for the first time. There are also some example characters at the end of the book which can be used as inspiration, taking their species and making a new character based on them, or taken wholly as they are for a quick game. 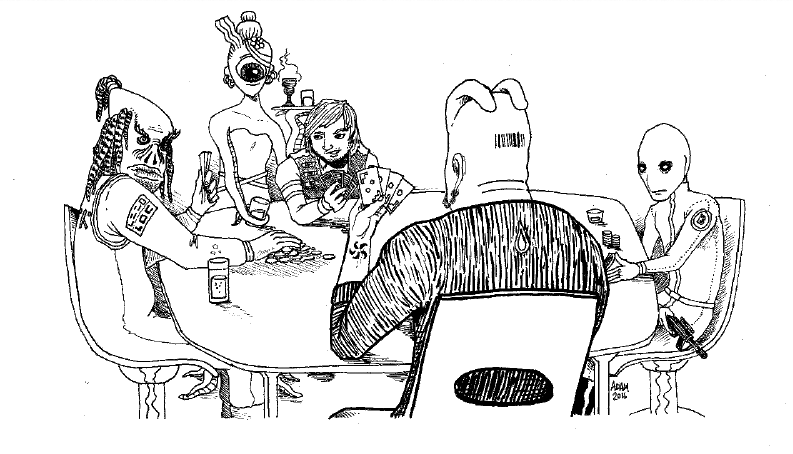 Overall I’d say this game seems like it would be a lot of fun to play or run as DM. The nature of its simple story, premise, and rules allows it to be quickly introduced to players and get right into the action. For this reason I think it would also be a great first game for someone completely new to RPGs, as long as they are comfortable with roleplaying and don’t need a lot of structured rules to tell them what to do in any given situation. For the same reason I think this game would be great to run as long as the DM is fairly experienced or just confident in their ability to run a game without a lot of aids to cling to in order to make the game interesting. This is a fairly light read being under 40 pages, and there is an impressively well rounded game crammed in here for being so lightweight.

If you want to give the game a try and support the creators, then find it and a few supplements for a very reasonable price here: https://www.drivethrurpg.com/product/200737/SotS-Skum-of-the-Stars–Beginners-Edition