I’m always on the lookout for any interesting RPGs I can find, especially ones that are based on some of my favourite things. The first games I tried running are The One Ring and the Discworld GURPS RPG which are my two favourite series of books. I even had a go at making my own RPG (using existing rules) based on Metal Gear Solid, one of my favourite videogames series.

So one day, as i was sitting here surrounded by elder scrolls maps on my walls, I got to wondering if there were any RPGs based on another of my favourite game series; The Elder Scrolls. It seems like a perfect setting to me, with such a rich existing world in both geography and history, as well as game mechanics that are pretty easily translatable to pen and paper form. The first game in the series was even based on D&D itself, which can be seen in the later games too, but the setting is also unique enough to warrant having its own RPG.

Unfortunately it turns out that there aren’t any officially licensed or professionally made RPGs based on The Elder Scrolls. What there is however, is a lot of fan made stuff out there. Most of this is what you’re likely to see with plenty of other settings that people have thought would make a good RPG, and they’re mostly just conversions based on existing RPGs or rules systems. There’s a bunch of them, including ones based on d6, d20 and d100 systems, and the previously most popular was heavily based on the Warhammer RPGs. out of these though there is one that stands out the most, simply named ‘The Unofficial Elder Scrolls RPG’ or UESRPG, it is the ‘second edition’ of that one based on the Warhammer system, but with a lot more added to it and more well polished. 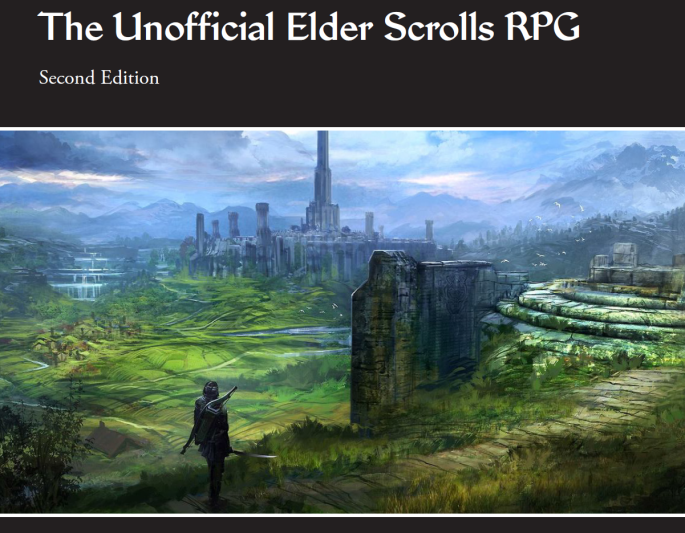 The game is entirely fan made by a small group, most of which came to the project through 4chan’s /tg/ board. At this point it appears to be down to the original creator of the game known as Seht. There is a fair amount of content with a core rulebook and several supplements, the only thing missing right now is the planned GM Handbook, but it may be a while until that is completed as the creator appears to be a busy postgraduate student now. Fair enough.

The Core rulebook has all the info on game mechanics you need to really play the game, as well as all the basics for character creation, magic and equipment. The basic system for rolls and skills is a basic d100 system where you aim to roll under your skill rating, which is a system i like a lot and have used a few times. The skills, attributes and characteristics on the character sheet all suit the Elder Scrolls setting very well, and will look more familiar to you if you have played Morrowing or Oblivion, as Skyrim heavily simplified everything in this regard. Character creation and the selection of races is as you would expect, with background on each race (more than you get in the videogames!) and some basic starting stats, which coincide with the areas of skill that they are best at, mostly based on Morrowind as far as I can tell. The Racial bonuses are great as they let your character excel at certain things if you decide to play heavily on them. For example they may give you a special talent, or make upgrading skills 75% cheaper. My favourite is the Dark Elf 75% fire resistance, as it brings back good memories of playing Oblivion where all the Daedric fire magic could barely harm me 😀

The Spell list in the core book is extensive and has plenty of interesting spells, all with the typical Elder Scrolls schools of magic. On top of this there are skills for making enchanted gear, brewing potions, and creating single use magical scrolls. The magic system is effective yet simple enough to even allow your character to create their own spells once they become a powerful enough mage. One thing unexpected that this game adds is backfire effects for when your spellcasting roll critically fails! This involves tables that you roll on based on the school of magic you were using, featuring some potentially interesting effects. Finally in the core book, the rules for equipment and crafting is as good as you would hope, with rules for all the different items you would have a use for in game, and all the materials for weapons and armour, which effect the price, weight, properties, and skills needed for crafting with it.

For the supplements, there are a few that all add some extra things that shouldn’t necessarily be used in every game, but are interesting to use in some niche cases. First is the Arcane Arts book, which has advanced magic and some different schools such as necromancy, Forsworn Reach magic, Ancient Redguard Sword Singing, and Dragon Shouts.

Next is the Dark Paths book which has all the rules you could need for making a character who is a vampire or werewolf (or playing one which involuntarily becomes one). Everything is here, including the different types of were-beasts you can be, the different vampire bloodlines, stages of vampirism, and even being a vampire lord. Furthermore there’s some options more for the GM on how severe they want a vampire ore werewolf’s condition to be, such as how sunlight and silver effects them, how much of a craving do they feel, how powerful it makes them, and how frequently they must transform.

Inhabitants of Tamriel extensive rules for thr GM on creating and playing NPCs, and a huge list of types of creature and other NPCs with all the stats and info you need on them.

The Player Handbook has some tips on how to play the core races, and some rare and interesting options for extra races you could pick, such as Falmer (Snow Elves), Ayleids, and the subspecies of Khajiit.

Tamrielic Artifacts is a small addition that has background and rules for the legendary magical items that have featured in the games before, and in the history of Tamriel.

Finally for now, there is Secrets of the Dwemer which has plenty of information for the GM on using Dwemer artifacts, ruins and living constructs in their game, as well as rules for making Dwemer characters, which if you know your Elder Scrolls lore is a long shot, but interesting nonetheless!

If what I’ve put here has made you want to check the game out for yourself then please do! It’s a very well put together fan made RPG, one of the best I’ve ever seen. Here are the links with everything you need –

The Mediafire with all the PDFs as well as other fan made projects the the creator has compiled: http://www.mediafire.com/uesrpg

The subreddit for the project where the creator is frequently active if you want to get in touch, as well as find some good discussions about the game: https://www.reddit.com/r/UESRPG/

One thought on “The Unofficial Elder Scrolls RPG”