Today we talk about a game no-one wants to play with me anymore: Jungle Speed!. I love it! I’ve owned for years and after a few games I don’t get to play it very often because apparently I always win…¬¬…Also, because people feel self-conscious of their lack of reflexes, eye hand coordination and incapability to distinguish shapes 🙂 X’D

In any case, that is exactly what Jungle Speed! is about, so if you are no good with your agile reactions, can’t differentiate a circle from a hexagon, and are incapable of remembering a couple of very basic rules then this is not the game for you – Yes, I am being facetious, sarcastic and scornful, it is time to redeem myself!! But if you are willing to give it a go, or you just want to watch your friends fail miserably, this is something you should try. Jungle Speed! is very much a casual game: perfect for parties, warm up gaming sessions, a quick game, etc. The great thing about it is that you can pretty much play with any number of people and it does not last long. The longest game I have personally played lasted 20 minutes, and it was a 1v1 with the entire deck plus the expansion pack. This is also a suitable game to play with kids, or for kids, and it can even be didactic. You can use it for improving reflexes and coordination, learning shapes, colour and definition sharpness – honest, it helps.

So how you play Jungle Speed!? If you have ever played Snap you will get the idea – pretty much the same principle but reversed. The objective is to be the first player to get rid off your deck of cards. The deck cards are distributed evenly amongst the total number of players, facing down, and placed in a pile in front of them and close to the edge of the table/surface you are playing on. Then the totem is placed in the middle at a distant where everyone can reach easily – I find that for this purpose circular tables work best.

Once everyone is comfortable with the game set up the rules are easy:

-You can only use one hand, always be the same one, both to flip the cards and to pic the totem. Your hand must be next to your pile of cards, otherwise you will be cheating by being closer to the totem.

-Every turn you flip the top card of your pile and put it in front of your current deck. The way you flip the card is outwards so you are technically the last person to see the card revealed.

-Everyone follows this process until a player reveals a card of identical shape to the one in front of you. In that moment Only the Players with Identical Cards try to reach for the totem.

-The player that grabs the totem gives his revealed pile to the loser/s. If more than one player get to the totem at the same time the following tie-breaker applies: whoever has more fingers wrapped around the totem wins. Otherwise the player that is holding the totem by the middle or middle-bottom technically has a more secure grip, so takes the win.

-Once the duel is resolved, the loser puts his revealed cards and the ones from the winner face down back into their decks, and the round starts again with the person to the right of the loser.

-Repeat until game over.

-If at any point you grab the totem without having a matching card with someone else, your take ALL the revealed cards of all players.

-If you attempt to grab the totem and instead you drop it: ALL revealed cards go to you.

There are some special cards that may appear throughout the game just to break up the dynamic. They all involve grey like arrows commanding you to do something:

-Grey Arrows pointing Inwards – or otherwise known as The Lilly Card, ’cause no one else gets it –  ALL players are compelled to grab the totem regardless of the situation. If you take the totem, you put all your revealed cards underneath it, so when a penalty or a duel is resolved these go to the loser.

-Grey Arrows pointing Outwards – count to 3 and ALL reveal a card at the same time. If duels/special cards occur resolved them as usual and then continue with the game. 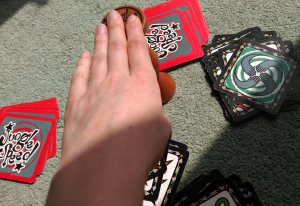 -Coloured Arrows pointing Inwards – ignore the shapes and play by matching colours. This card stops affecting the game when its player puts a different card in front of them or their revealed pile is taken away.

ADVANCED RULES: if you’re feeling brave and you have the expansion, you may want to introduce a certain number (Or All! Go Mad Why Not!!) of the special card that comes with it. This is a card of Grey Arrows forming like a circle. This means  the revealed cards you play with are not your own pile but that of the player to your left. If you use more than one of these, they can stack so you may end up playing with the cards of 2 or 3 players down your left. But this is just an extra rule and noway compulsory.

Particularly due to how tactile the game is, Jungle Speed! is something learnt best while playing. I would suggest keeping this rules in mind and try to have a go. As you play you get a feeling of the movements you need to time, the pace of the game and the complication of the shapes. Have one or 2 test rounds just for this purpose, don’t just go straight in unless you’re confident  – and you don’t sulk when you hit yourself instead of grabbing the totem 😉 So have a go, have fun, and don’t be a bad loser and ruin the experience for the owner so they can never play again: don’t be mean like my friends X’D.

*WARNING/DISCLAIMER* Jungle Speed! is known for causing material damage to living rooms and kitchens. Please ensure your guests are mindful of the totem so this does not fly straight into your TV. Moreover, remember to bring ice-packs if you are the fastest player, you may find that you end up with scratched arms, fingers, and the not so occasional totem print on your palm from everyone “gently” placing their hand over yours *