simultaneously throwing 5 dice, all of different sides, in the middle of a shouting match
about which of the 15 different plans is going to deliver the fewest losses in a situation that has almost no chance of success. You take on complex politics and fleet actions of millions of men and women and make house of cards look like its full of the most ethical people to ever grace politics.

Though you’ve probably got your preferred games by now and some of the most fun games can be on the simplest systems.

Make your own system

If every time you find a problem you think, “I could do better than this!” then do it! Grab a notepad and start brainstorming ideas, one of my favorite games at my university society was a system inspired by the one piece anime and then it was handed around from GM to GM each polishing the core mechanics and creating optional rules for mecha or ship battles, special attack and weapons.

Pick your dice, the style and get some friends to play-test and don’t be afraid to throw in new rules and take criticism. And most of all, have fun.

Well you’ve got pretty experienced and now you enjoy the pain and dealing it out, you’ve reached the stage where the death of a character is to be enjoyed as much as you used to fear it so there is no choice but to find some willing partners and get the chains and whips out… COC there are actual chains and whips

Call of Cthulhu by sandy Peterson

Based in the Basic role play system (this doesn’t count as generic) based upon the works of H.P. Lovecraft, CoC adds an scalpels edge to the already sharp system, adding the sanity

mechanics to the game, your characters will almost defiantly be driven insane but that’s
on the assumption that they survive long enough. The more killing you see or commit yourself with demand rolls against your ever lowering sanity giving you crippling phobias, gaining advantages such as magic will only accelerate your decent into the darkness that you are ever struggling against.

A world of elder gods, relative moralities, beings that are powerful enough to destroy the word in a matter of seconds that will dive you insane at a glance… but not necessarily evil, more the second most annoying alignment, Chaotic neutral. Are you willing to do what is necessary to save the world, sacrifice your humanity, and almost defiantly a you life… several times.

Vikings fighting off the elder ones to 1920 investigators or Cthulhu in space the setting doesn’t matter, what matters is delaying the apocalypse, delay not stop for it can’t be forestalled too long. Combat is deadly and many times the most you can hope is to go out with the equivalent of a guitar solo playing in the background as you empty your clip into a monstrosity.

A rudimentary understanding of the Lovecraft world is useful but not essential in this world as the characters are usually new to the other side of reality as it is so from a role play perspective it could be an advantage. The system gives a good balance between encouraging role play and the rule structure. 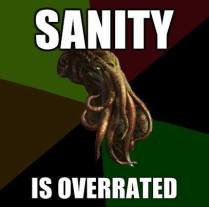 With literally hundreds of premade adventures out there a less experienced GM can take the lead on one of these games but everyone should expect pain but buckets full of pleasure from playing, this is not a
game where you pull your punches and will bring out the inner psychopath that is within all of us (if you think it’s not there you are wrong, it is). Origin of the story of Old man Henderson I wholeheartedly recommend this system though it may not be for you.

Waring kings and wild magic. In this game you play knights or high born lords in the land of Albion in the time of Arthur, this is undoubtedly one of the deadliest games I have ever played, more so than Cthulhu and that game is designed to kill you. A fast and horrifically brutal combat system reflects real life that means a single hit can kill a heavily armored knight. While completely non-combat driven characters are as effective if not more so than the knights, forging documents, hiring spies and assassins.

Working on a “price is right” style d20 system where if you roll below your skill you succeed on the skill level to crit and anything above the skill is a fail and a 20 is a crit fail. The system is easy to understand and very quick to make a new character once the character creation rules are understood.

The game itself can be adapted for other settings, my first experience of this games was

based in a romance of the 3 kingdoms period of china and through reduced Armor had a mortality rate of 1.2 characters per session. The players however adapt quickly by altering their strategy to find more advantages before they go into combat or any social situation which can be as deadly with powerful kings who can order your death with a nod. Because of the known mortality rate the system has family mechanics where the players create a family tree to give spare NPCs who scream “I WILL AVENGE YOU BROTHER/FATHER/SISTER” and become PCs as well as marriage and children who grow up (years go by very fast in this game).

Large scale battles and sieges are controlled with one skill each used to command the men or using battering rams, each player controlling thousands of men at arms. This however does reflect the main difficulty with this system, the limited number of skills, many of the skills will have to be multi-purpose, sometimes too much so.

Despite its flaws it is a very fun game which spawned the phrase “oh I used to be afraid of my characters dying, then I played Pendragon”, I whole heatedly recommend this game to anyone wanting to try a bigger scale game.